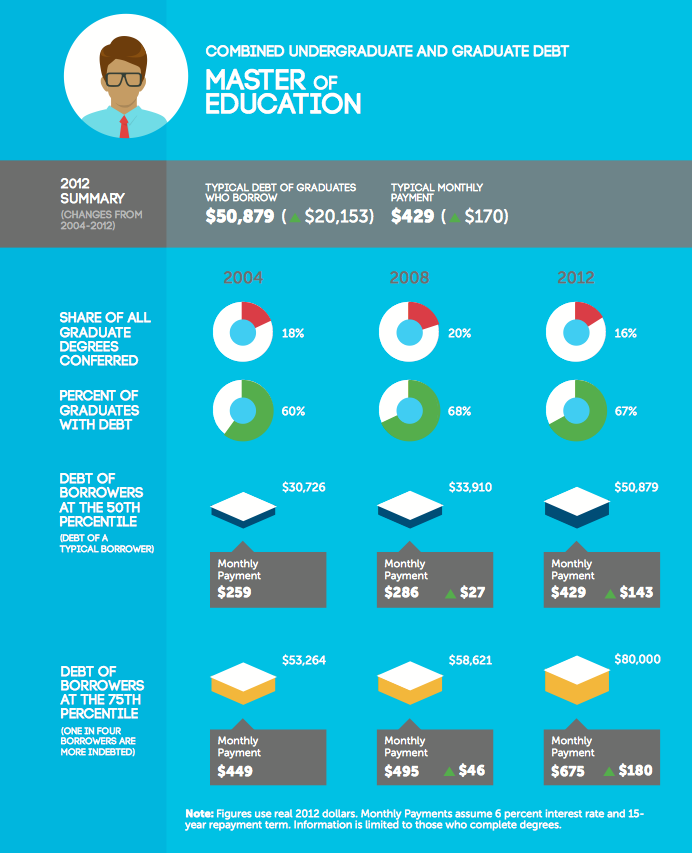 Should future teachers be taking out massive loans to get their master’s of education degrees?

A March 26, 2014 report by the New America Foundation points out that as much as 40 percent of the $1 trillion in student debt outstanding was borrowed not for college, but to pay for grad school. And some 80% of of the debt incurred by students who finished their grad school programs in 2012 wasn’t for people going into medicine, law or business, but for less profitable professions, such as teaching. Indeed, the average graduate of a master’s in education degree finished with more than $50,000 in debt — $8,000 more than the debt of a typical MBA graduate. That’s a 66% increase in the debts of newly minted teachers since 2004. Another way to think about it is that the average newly minted teacher in 2012 has to pay $429 a month in student debt payments. Half owed more.

The report’s authors predict that these teachers and other indebted graduates won’t be able to earn enough money to afford to pay back their loans.  That will leave taxpayers holding the bag, effectively subsidizing schools of education.

The recent spike in debt for graduate degrees should also focus policymakers’ attention on the lack of loan limits for students pursuing graduate degrees and income-based repayment programs that include loan forgiveness benefits. The debt statistics in this New America report suggest that graduate and professional students are likely borrowing at levels that will lead to substantial waves of student loan forgiveness in the coming years.

A footnote in the report explains how grad school loans work.

The federal government lets graduate and professional students finance the entire cost of their educations with federal loans, for any degree, for any length of time, including all living expenses, regardless of the total cost. Graduate and professional students may first take out $20,500 per year in Unsubsidized Stafford loans, and after that, they can tap federal Grad PLUS loans for the rest of the costs. A series of programs, Income-Based Repayment, Pay As You Earn, and Public Service Loan Forgiveness, that lawmakers enacted in 2007 and 2010 let borrowers repay those loans based on a small share of their incomes, regardless of their debt loads. After 10 or 20 years, remaining balances are forgiven. Note that undergraduates face relatively low limits in the federal loan program, thereby limiting the benefits of loan forgiveness under these plans. That is because a borrower entering repayment with $30,000 in federal loans could have his debt forgiven under one of the repayment programs only if he earns an unusually low income for an extended period of time. Someone with a master’s degree who has $80,000 in debt, on the other hand, can earn an average income for his peer group for most of his repayment term and his payment will still be too low to fully repay the debt. He will have a balance forgiven.

The New America Foundation used the the PowerStats tool from the National Center for Education Statistics to analyze data from the U.S. Department of Education’s National Postsecondary Student Aid Study (NPSAS). That study is conducted every four years.