Should students discover their own math lessons? 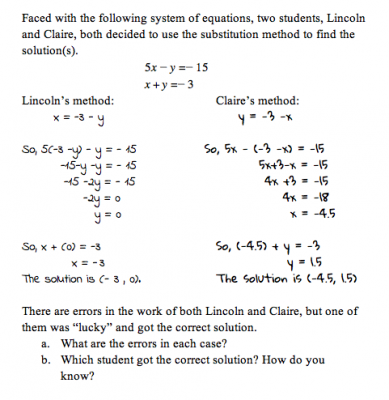 Example of a student-centered homework problem from the November 2014 AIR study.

Student-centered instruction is difficult jargon for lay people like myself to get their heads around, especially for a subject like mathematics. The idea, as I understand it, is to present students with questions, puzzles and scenarios and let them try to figure out the procedures for solving them, by themselves. A traditional teacher might simply explain, for example, how to graph a line, step-by-step, using y-intercept and slope. And a good traditional teacher can explain things in many ways and give students a tool box of procedures to tackle any problem. A student-centered teacher might turn the classroom floor into a giant graph-paper grid and ask the students to become data points and walk to where they should be plotted.

So which is better, a great teacher who explains things clearly, perhaps even with wit and humor, or a legendary teacher who takes a more Socratic approach and masterfully guides students to their own conclusions?

A team of researchers sought to answer exactly that question in a paper, “An Up-Close Look at Student-Centered Math Teaching and Its Effects on Learning: A Study of Highly Regarded High School Teachers and Their Students,” published on Nov. 18, 2014.

Led by Kirk Walters of the American Institutes for Research (a quantitative research organization which also makes standardized tests for schools), the researchers found a group of 22 superb high school math teachers in New England and New York to study. Half were traditional teachers and half used many student-centered approaches. The conclusion of this small and imperfect study was that the more a teacher used student-centered approaches, the more his or her students learned, and the better they did on an exam of complex problem-solving that resembles the PISA international test for 15-year-olds, on which the United States has historically done  poorly.

“It was significant,” Walters said, explaining that, despite his small sample size of 22 teachers, the data showed bigger learning gains for the students who’d had student-centered instruction. Walters wasn’t able to quantify exactly how much better student outcomes were for each additional increment of student-centered instruction. So it’s unclear how large the benefits are.

The main shortcoming of this study, besides its small size, is that the students in these teachers’  classrooms were mostly from middle-class households in six New England states and New York. They were far less ethnically and racially diverse than the nation. The students of these super teachers tended to be high performing students, scoring well above the national average on tests to begin with. Walters said student behavior wasn’t a problem for teachers in these classrooms. Interestingly, the researchers found that their group of 11 student-centered teachers had a higher proportion of poor students in their classrooms than the 11 traditional teachers did (36 percent qualifying for free or reduced price lunch vs. 24 percent).

Would student-centered approaches work with different populations of students in different types of schools? Does student-centered teaching work in a high poverty inner-city school where students are struggling and behind grade level? Those questions require further study.

Walters also says that further research is needed to understand when student-centered approaches are most effective. It may be that some concepts in mathematics, such as how to take a square root, are best taught through direct, traditional instruction. But other topics, such as solving a system of two equations, might be best taught through student-led inquiry. It’s also possible that student-centered approaches are appropriate for every topic, but not at every moment — for example, when introducing a new topic or when reinforcing one that has already been introduced.

This study purposely looked only at highly regarded, excellent teachers, so that you couldn’t criticize the study by saying, well, maybe these teachers didn’t do student-centered instruction properly. It’s a more challenging, indirect way of teaching. Previous studies have sometimes found that student-centered teaching didn’t work. For example, a 2014 Pennsylvania State University study found that student-centered approaches didn’t work for first graders who were behind and struggling. But it could have been that many of the teachers of these 14,000 students weren’t doing this method of teaching correctly.

Related: Right and wrong methods for teaching first graders who struggle with math

For high school math teachers, the most useful part of this study might be the case studies of great student-centered instruction. The authors were able to conduct classroom observations of seven of these 22 excellent teachers. From these, the researchers transcribed examples of student-centered classroom discussions and contrasted them with transcriptions of traditional discussions. They also printed examples of math problems that teachers gave students, to highlight how even homework can be traditional or student-centered.

It goes to show how difficult it is to study teaching approaches, and to figure out which ones work.