Are schools more segregated than in the 50s? What does the data say? 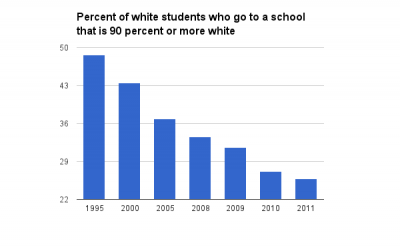 Conventional wisdom in education circles is that school segregation is worse today than before the Supreme Court ruled in 1954 that separate schools for whites and blacks were unconstitutional. Many in media are citing statistics from a May 2014 report from the Civil Rights Project at UCLA. Slate’s Jamelle Bouie wrote that it shows, “minority students across the country are more likely to attend majority-minority schools than they were a generation ago.”

But federal data from the National Center of Education Statistics (NCES) don’t entirely support this narrative that segregation is getting worse.

Others have noticed the increased prevalence of schools dominated by low-income blacks and Hispanics. Perhaps blacks are not more likely to go to a black-only school, but a school that has only blacks and Hispanics? The NCES data doesn’t tabulate which schools are more than 90 black and Hispanic, but it does tabulate which schools are more than 90 minority. However, this minority data counts all minorities, including Asian students.

Whites are no longer in the majority in the U.S. school system (see this post). If we lived in an ideal society with perfect integration, all of our schools would indeed be majority minority going forward. And so declaring that minorities are more likely to be going to a school that has 50 percent or more minorities doesn’t indicate increased segregation.

It’s obviously not a good sign when the percentage is rising of Hispanics and blacks who are going to schools that are 90 percent or more minority. What other kinds of data thresholds should we use to demonstrate segregation?

Percentage of each racial/ethnic group by the percent of minorities in that school. http://nces.ed.gov/programs/digest/d13/tables/dt13_216.50.asp

White students predicted to be in the minority in U.S. public schools by fall 2014