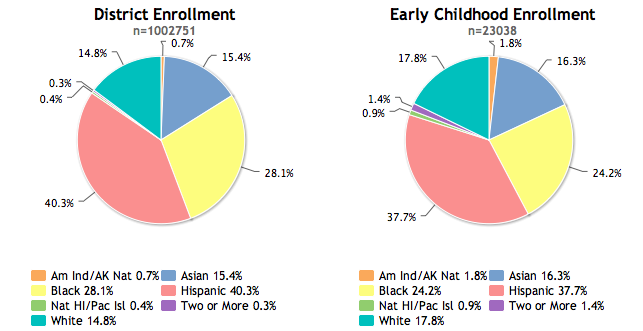 These pie charts show that whites make up fewer than 15 percent of the student population in New York City’s public schools, but they took nearly 18 percent of the city’s limited and coveted pre-kindergarten slots in the 2011-12 school year, the most recent year that data was available. That’s according to an interactive civil rights database released by the U.S. Department  of Education on March 21, 2014.

NYC Mayor Bill de Blasio is pushing to expand the school system to offer public pre-k slots to every child in the city. To win a seat in the current allocation system, parents must register online or in person. A lottery then allocates the limited seats available, but the lottery is not random. Younger siblings of current students are slotted first. Geography matters too. Families who live within the school zone of a particular pre-k program are prioritized.