Unclear where U.S. students stand in math and science

I don’t know what to make of a long-awaited report issued Oct. 24, 2013 by the National Center of Education Statistics showing that most U.S. eighth grade students are not at the bottom of the global barrel when it comes to math and science. The study extrapolates what students in every state in the Union would have scored on an international test, the TIMSS, had they taken it, based on what they actually scored on the NAEP.

On the negative side, students in even our strongest state, Massachusetts, trail behind students in Chinese Taipei, Hong Kong, the Republic of Korea, Singapore and Japan in math.  This is important. I often hear people dismiss the American sliding in international statistics because they correctly point out that the U.S. has greater poverty than these other countries. Naturally, average scores will be lower in countries that have higher rates of poverty. But, when you have a high income state like Massachusetts that can’t keep up with the Joneses, I fear there’s something wrong with the U.S. education system. Our problem is at the top.

The other thing that has me troubled about this data report is that too many countries are not in the study: India, China, France, Germany…..the list goes on. I fear that our ranking would be even lower if they were included.

Here’s the full report. And chained below are three graphics from the report (on pages 14 and 15) that show where each state, from Massachusetts to Alabama, ranks. The first graphic ranks our top performing states, the second graphic our middling states and the third graphic our bottom states. If you chain all three graphics together, you’d have a full list. 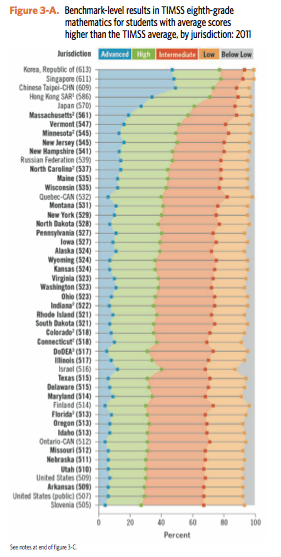 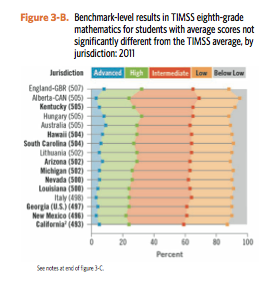 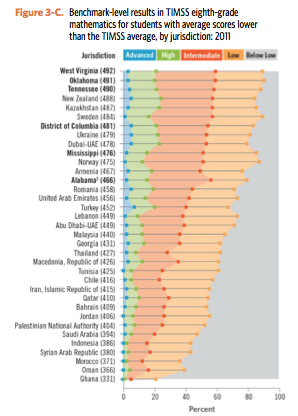