What U.S. schools can learn from Poland 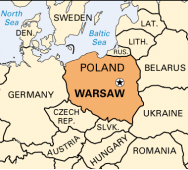 By any measure, Poland has made remarkable education progress since the fall of the Berlin Wall. On the most recent 2012 international tests of 15-year-olds, known as PISA tests, Poland ranked 9th in reading and 14th in math among all 65 countries and sub-regions that took the test. It used to be on par with the United States, a mediocre performer. In math, for example, Poland gained 2.6 points a year between 2003 and 2012 while the rest of the world, on average, remained unchanged.

And on Sept. 9, 2014, when the Organization for Economic Co-operation and Development (OECD) released its annual indicators, “Education at a Glance 2014,”  another important indicator appeared: Poland’s college graduation rate is soaring.  In 2012, 25 percent of Poland’s adults held a college degree, up from only 11 percent in 2000. At that rate, it could soon eclipse the United States, where more than 40 percent of adults have a college degree (this includes two-year degrees).

“Poland is an interesting case study,” said Andreas Schleicher, director of education at the OECD. “It used to be modest. It  is now at the frontier, in little more than a decade.”

How did Poland do it? Its political leaders scrapped their Communist-era education system back in 1998. Instead of the state sorting students into vocational tracks, it opened the system up and allowed students to make their own choices. Dismantling a central command system is not required in most countries, but others countries can learn from Poland, Schleicher says, in two other ways: educational improvements can happen relatively quickly and relatively cheaply.

“For other countries, Poland highlights that what’s really possible in a relatively short period,” Schleicher said. That upends the conventional wisdom in education that real progress is slow and incremental. Also, “None of this has been achieved by putting more money into the system,” he said.

Although spending per student has in fact gone up  in Poland (largely because of declining birth rates and a declining student population), the growth in per-student spending remains well below the growth in education spending in other countries. (Click on the chart below, also from the 2014 Education at a Glance publication, to see a larger version). 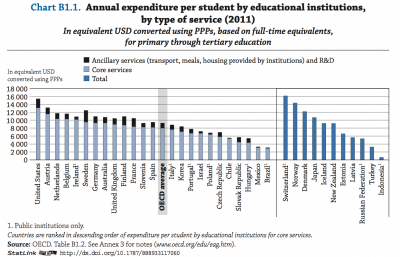 Fast education results on a modest budget are alluring. And it will take more scrutiny of the Polish education system to understand what teachers are doing there. Classroom culture and student behavior may play a role. Polish teachers spend less time keeping order in their classrooms than teachers in any other nation, according to the OECD’s teacher survey (TALIS 2013).

Schools in the United States experimented with increased instruction time in the basics during the Bush administration, but have since retreated. Back in the 2000’s, No Child Left Behind policies that mandated student testing prompted a majority of school districts to increase instruction time devoted to the two tested subjects: reading and math. (Source: Center on Education Policy, NCLB Year 5: Choices, Changes, and Challenges: Curriculum and Instruction in the NCLB Era). But parents protested that other subjects, especially science, social studies and the arts, suffered. A majority of states have since received waivers from the testing requirements.

Apparently, parents in Poland did not feel the same way.