Lessons from Hawaii: tracking the right data to fix absenteeism

Good school attendance is associated with all sorts of good educational outcomes, especially higher grades and higher test scores. It’s obvious: if you’re not showing up for school, you’re not going to learn as much. But only 17 states track and report chronic absenteeism data, according to the Data Quality Campaign and Attendance Works, a non-profit organization that advocates for more focus on absenteeism data and ideas for getting students to come to school.

“People aren’t tracking the right data now. They’re paying attention to average daily attendance and truancy, but not the kids who are at academic risk,” said Phyllis Jordan, a spokeswoman for Attendance Works. Truancy is generally defined as unexcused absences, but many chronically absent children don’t get captured in the truancy data because they had a reason for missing school or a parent-signed slip excusing their absence.

A recent presentation by a state education official from Hawaii, one of the 17 states that does track chronic absenteeism, showed just how misleading it is to focus on average daily attendance rates. Dave Moyer, speaking at the 2014 National Center for Education Statistics data conference on July 31, 2014, found that even at Hawaiian public schools where 95 percent of the students show up every day, chronic absenteeism can be a gigantic problem where as many as one in four kids  — 25 percent — are missing 15 or more school days a year. Hawaii schools boast of 95 percent daily attendance rates. But when Moyer first drilled down into the data, he found that more than one in five students throughout the state were chronically absent.

It’s worth pausing a moment to understand how these seemingly opposing statistics  — high daily attendance and high chronic absenteeism — can coexist. Imagine a school with 100 students and a 95 percent daily attendance rate. On day one, 95 of them show up and five play hooky. Then imagine that the same five students play hooky 15 days in a row. Already, you have 5 percent chronic absenteeism just 15 days into the school year. Now pretend those truant children decide to mend their ways and attend school again. And grab a new group of five kids (from the 95 that had been attending every day) to skip school. Again, you still have a 95 percent attendance rate. But if this second group of 5 skips school for 15 days, then you’d have a total of 10 kids, or 10%, of the student body that would be considered chronically absent. That’s after only 30 days. You could theoretically get to 20% chronic absenteeism just 60 days into the school year.

In other words, it’s a small group of, say, 20 students who are frequently missing school. Maybe only five of them miss school on any particular day. Most of the remaining 80 percent have fairly stellar attendance records. And the school can still boast of a 95 percent attendance rate overall.

Since too few states track it, it’s hard to say if Hawaii’s absenteeism problem is worse than, better than or about the same as the national average. Even the states that track absenteeism have different definitions for what it means to be chronically absent. Hawaii’s threshold of 15 days is believed to be one of the lowest in the nation. Most other states or districts wait until 18 days, or until 10 percent of the 180-day school year is missed, before labeling a student “chronically absent.” A 2012 Johns Hopkins study estimated that 10 to 15 percent of students in the U.S. are chronically absent each year.

Solving absenteeism is another matter. “I don’t know how to fix the problem,” Moyer said. Moyer found that the reasons that kids don’t show up for school are many and varied. Some students suffer from asthma and have trouble coming to school on what Hawaiians call “voggy” days, when volcanic particles are thick in the air. On the big island of Hawaii, a two-mile hike down a steep mountain to the bus stop can be too arduous in bad weather. Bullied kids can be too scared to go to school. Others simply cut school to go to the beach.

Race and ethnicity seem to be a factor, too. Native Hawaiian, Micronesian and Samoan students were disproportionately represented among the chronically absent population.

But Hawaii has had some success in lowering chronic absenteeism statewide from 21.8 percent to 19.7 percent over the last few years, after making principals accountable for it. Five percent of an elementary’s school performance rating is now based on its chronic absenteeism rate. One community noticed that students were hanging out at the Seven-Eleven instead of showing up for school on time, so they persuaded the convenience store to shut down at 7:30 in the morning. “One Seven-Eleven closing had a big effect,” said Moyer. “The best solutions are local.”

So which days of the year are students least likely to cut school? Moyer counted attendance on every day of the school year and found two of the highest attendance rates on Halloween and Valentine’s Day. “Really, the takeaway here is that candy drives attendance,” Moyer jokingly concluded. (Click on Moyer’s chart below to see a larger version). 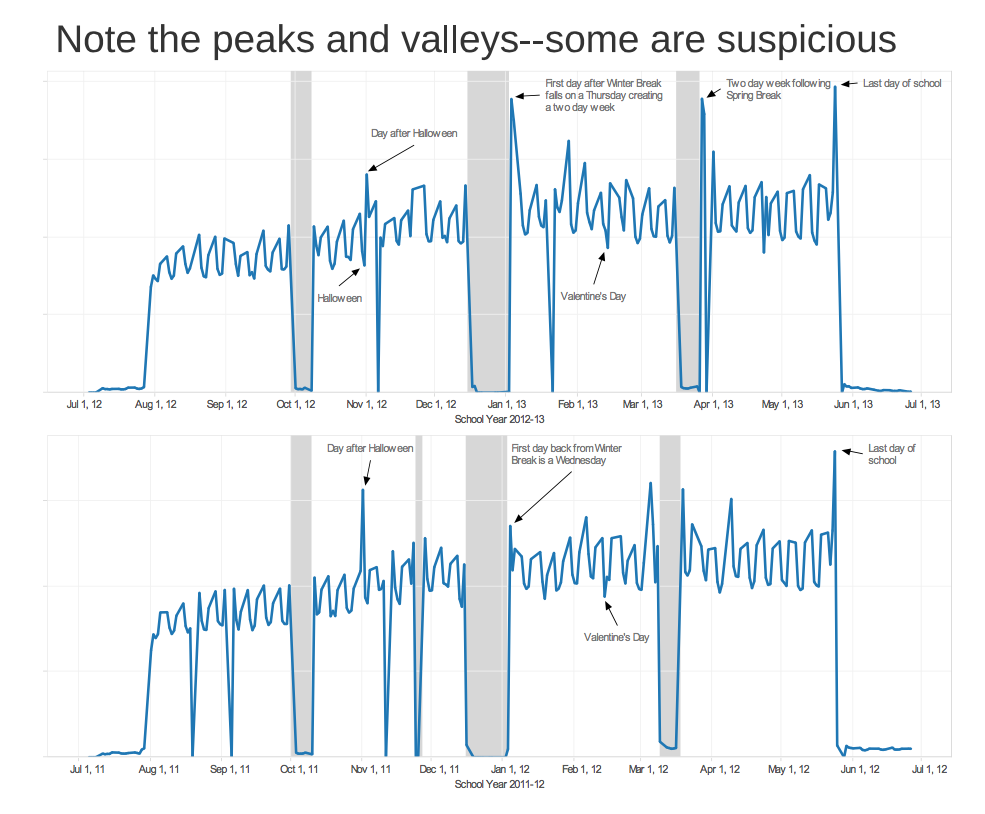