Here’s a bit of data that confirms what we already suspect. According to a 2012 survey by the National Assessment of Educational Progress (NAEP), fewer than 20 percent of 17-year-old high school students (19 percent to be exact) say that they read for fun on their own time almost every day. That is the lowest percentage since NAEP began asking that question to U.S. elementary, middle and high school students. Back in 1984, more than 30 percent of 17 year olds said they read for fun every day. 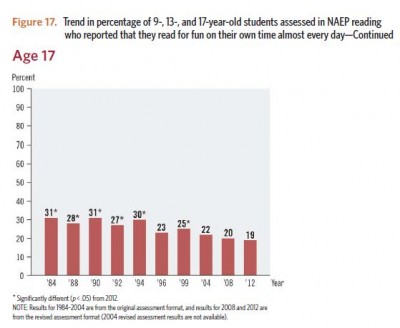 The same downward trend is true for 13 year olds with just 27 percent reading on their own these days, compared with 35 percent back in 1984. Thank the Lord for Harry Potter and JK Rowling’s grip on nine year olds. Fifty three percent of nine year olds said they read for fun in 2012, no drop at all since 1984. 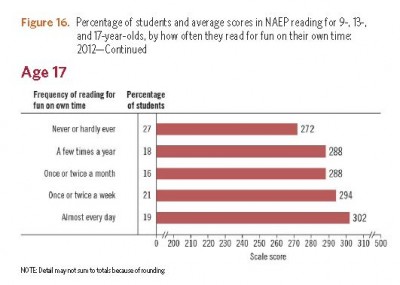 NAEP doesn’t explain the decline in reading among teens. It seems obvious to jump to the conclusion that teens are playing more games and texting on their iPhones than reading books. I certainly see that on the New York City subway. But aren’t nine year olds playing video games too? Why hasn’t their reading suffered?