Teachers, students and adult public more supportive of school testing than you might think 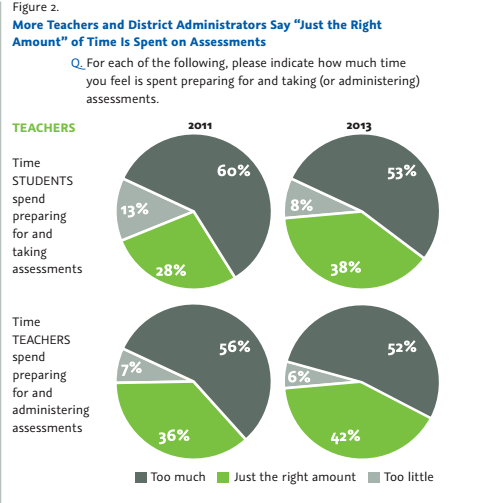 You might guess that standardized tests are the bane of both teachers’ and students’ existences, but two different opinion polls  show a surprising level of support for bubbling in circles with number 2 pencils. In Teachers versus the Public, a book published on April 29, 2014, Harvard Professor Paul E. Peterson reports that 86 percent of the public and 77 percent of public school teachers support using tests for graduation. In other areas, from teacher pay to unions, there’s a giant gulf between teacher perceptions and public perceptions.

“Accountability is one of the issues where the public and teachers agree” said Peterson.

Similarly,  Northwest Evaluation Association, a non-profit maker of standardized tests, released a (self-serving) survey May 6, 2014 showing  94 percent of students agree that tests are very or somewhat important for understanding what they are learning. Among teachers, 50 percent say they could not be good teachers without any assessments in their teaching. (One can quibble with the wording of the question. I suspect that you would get a very different result if you asked teachers what they thought about the assessments that they are being forced to prep students for right now. )