Can we use the same problem-solving tricks for classrooms that we use on the assembly line? 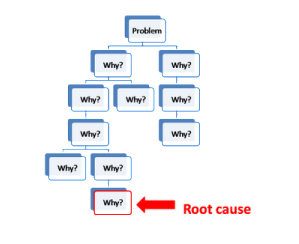 Back in the late 1950s the Japanese auto maker Toyota developed a novel approach for fixing problems on its production line:  root cause analysis. Rather than making a bandaid repair on a visible symptom, the idea was to ask a series of five “why” questions to get at the underlying root problem and fix that so that the problem doesn’t keep recurring. Here’s an example I found on another website.

Problem: The computer monitor is not working.

Why? The monitor’s light signal is not on.

Why? The monitor’s power cord is not functioning.

Why? The cord is damaged.

Why? It was placed under a heavy load.

Why? I didn’t place the cords properly when the monitor was plugged in, which caused damage.

The answer to the last why is the root cause of the initial problem of the computer monitor not working.

Critics of this approach pointed out that the answers to each why question were based on gut hunches and guesses. Different employees could ask a different series of why questions leading to completely different root cause determinations. So manufacturers started using statistical approaches to determining the answers to why questions. One of the more famous ones is embedded in a management technique called Six Sigma, developed by Motorola in the 1980s. This rigorous data analysis approach to fixing problems reduced manufacturing defects to nearly zero.

Over time root cause analyses became so popular that other industries, from retail to health care, began adapting and adopting it in their workplaces.

Now educators are experimenting with applying this kind of data analysis to fixing problems in the classroom. This coming wednesday, April 30th, the U.S. Department of Education’s Institute of Education Sciences  is offering a webinar on how to apply root cause analysis to education. The agenda indicates that Roni Silverstein, Principal of Fallsmead Elementary School in Montgomery County, Maryland is already using it in his school. A second webinar is scheduled for November 5, 2014.

I’d be curious to learn what areas of education would most benefit from this kind of assembly-line data analysis. I suspect that if you started with the big problems, such as, student achievement is too low that five why questions aren’t going to get you to an root cause answer that you can act upon. And I worry that each student is so different that it’s hard to come up with a math teaching fix that will apply equally well to the students who are two-years behind grade level as to the ones who have already mastered the material and are bored. Even a simpler problem, such as too few students are submitting homework, might have a multitude of answers to the question why.