Summer school seems to work better for math than for reading 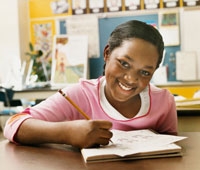 Back in 2007 a team of Johns Hopkins researchers found that low-income children tended to improve in reading just as much as their wealthier peers did during the school year. The problem, at least for a group of Baltimore children these researchers studied for 18 years, was summertime. During those three idle months, the poorer children’s reading skills slipped a lot. The researchers found that two-thirds of the ninth grade reading achievement gap could be explained by summer learning loss during the elementary school years. Educators have been aware of the summer slide phenomenon since the academic school year was created. But this seminal study documented exactly how it disproportionately affects disadvantaged students.

Now, what to do about it? One obvious idea is to send at-risk children to summer school. But does it work?

Related: Will ‘creative’ and ‘hands on’ summer school foster a love of learning?

The Wallace Foundation is trying to learn just that, with help from researchers at the RAND Corporation. Beginning in 2013, the foundation started financing a summer program that includes both academic classes, all taught by certified teachers, and fun activities, such as sailing or rock climbing, in five cities —  Boston, Dallas, Pittsburgh, Rochester, NY, and Jacksonville, FL. Low-income families with third grade children were invited to apply and attend free of charge. But the programs had spots for only about 3,200 of the 5,600 applicants.  That excess demand created an unusual opportunity to conduct a randomized controlled experiment — or at least as close to one as you can get in education.  The researchers could compare the outcomes of the summer program students to those who also applied, but weren’t selected.

Results after the first summer were mixed, according to a preliminary report, released in December, 2014.

The summer-program students scored much higher on a 2013 fall math test than the control group did. Those higher math scores were equivalent to roughly a fifth of what kids this age typically learn in a school year.

But there were no differences in the reading ability or social-emotional skills between the two groups of students.

About 40 percent of the children who didn’t attend the Wallace summer programs disclosed on surveys that they had attended another summer camp or program. That could be muddying the results here, and understating the benefits of going to summer school.  But the researchers also compared control group students who attended another summer enrichment program with the majority of the control group kids, who did nothing, and found no difference in their academic outcomes. So those concerns were somewhat alleviated. (See page 38 of the study).

Digging deeper into the data, RAND researcher Jennifer McCombs found that the kids who’d had higher quality summer reading instruction from an experienced third-grade or fourth-grade teacher did see higher scores on the fall reading assessment. McCombs explained that the reading curriculum was quite open-ended and not very scripted. So teachers who’d had prior experience teaching reading to children of this age knew how to teach it, keep the kids engaged and check for understanding.

“It was a very short program, five to six weeks tops,” she said. “Teachers had to hit the ground running and those who had experience with this age had an advantage.”

By contrast, prior math teaching experience was less important with math. “The math curriculum was more scripted, if you wanted to fall back on the teacher’s  guide,” McCombs explained.

The Wallace Foundation is using this information to improve the summer program. But already it shows that it’s not sufficient to hire inexperienced teachers to read books to kids, on the cheap. It may ultimately be quite costly to create effective summer programs that can reduce summer learning loss.

RAND Researchers are following these children to see whether summer learning gains persist throughout the 2013-14 school year, and after a second summer of the learning program in 2014.

Related: Are the lazy days of summer killing our nation’s academic progress?