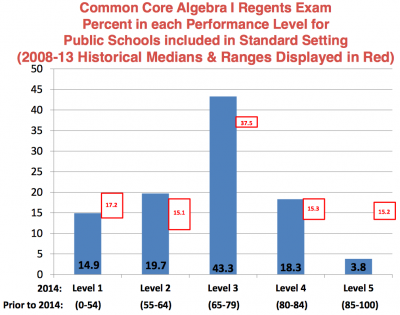 Page 56 of Board of Regents “Setting Performance Standards” dated June 23, 2014

New York State education policy makers had a difficult task when they sat down to grade the first high school Regents exams linked to the Common Core standards, in algebra and English, last month. They needed to establish a high bar for meeting the new education standards, yet at the same time protect current students, who haven’t had much Common Core instruction, from punishment. And the Regents are high stakes tests: New York students must pass five of them to graduate from high school.

New York risked a high school dropout crisis if they set the bar too high. But setting the bar too low invites criticism that the new Common Core standards are hollow. “That ends up signaling to teachers that you don’t actually need to know the content,” said Kathleen Porter Magee, a Common Core proponent at the conservative Thomas B. Fordham Institute.

Which is why policy makers fussed over the fine-tuning of cut scores — that is, the numerical point where the cut is made between passing and failing.

At the end of June, the Board of Regents released documents showing how they had calculated two different cut scores that effectively split the baby. They set one passing score for today — one that the majority of students can already attain — and a second passing mark for the future, showing how far students must progress to be ready for introductory college classes.

Only 22.1 percent of New York’s algebra students — mostly eighth and ninth graders — hit that aspirational mark in June. In English, it was much better, with 46.8 percent of the 11th graders who took the test hitting the college-ready mark. The class of 2022, currently about to enter fifth grade, will be required to hit these higher thresholds to pass and graduate. That’s a tall order in education, where progress is usually slow and incremental.

Originally, New York State had planned to require students to hit the college-ready mark on this first go-around. But after the uproar over low passing rates for New York’s first Common Core tests for elementary and middle school students, in 2013, Regents officials backed down in February of 2014 and created a safe harbor for current students. After students took the new tests on June 3, scorers were told to make sure that the passing rates didn’t differ from previous years.

In the June documents (on page 55) the Regents noted that the historical pass rates for algebra exams had ranged from 64.5 percent to 74.6 percent, but they chose a pass rate of 65.4 percent for June 2014. While a peculiar and notably low number, it allowed the Regents Board not to lower the floor too much on current students. When New York lined up all the student test results from lowest to highest, 65.4 percent of students had been able to get at least 30 out of 86 questions correct. If the Regents had lifted the new required pass rate any higher than 65.4, they’d have had to pass students who got fewer than 30 correct answers.

“They’ve never had to do that before; it would have been humiliating for them,” said Carol Burris, the principal of a high performing high school in Rockville Centre on Long Island, and an outspoken critic of the state’s approach to testing.

Meanwhile, the Regents used their traditional approach for setting two higher levels of passing scores. They assembled a panel of educators who took the math test and pooled their collective judgment. The educators decided that students ought to have gotten 54 of 86 questions correct to meet the new Common Core standards  (the college-ready threshold mentioned above) and 73 questions correct to prove “mastery” of those new standards. Only 3.8 percent of New York’s eighth and ninth graders hit the mastery level on the new algebra exam, compared with more than 15 percent on the easier pre-Common Core exam. The graphic on the upper right corner shows how much tougher it is to be excellent in the new Common Core universe. (Click on it to see a larger version).

To understand how unusual the new Common Core Regents grading curve is, imagine a 10-question test, where you need to get 3.5 questions right to pass, but 6 right to get a B, and 8.5 right to get an A. On the old test, by comparison, you would have needed a similar 3.4 to pass, but only 4.5 correct to get a B, and 7.5 to hit the A. (I calculated these thresholds from Regents conversion charts here and here).

On the English exam, the Regents did almost the opposite. They picked a notably high pass rate of 76.6 percent on their historical range of 69.9 percent to 78 per cent.  But then they used a complicated process of overweighting the writing questions so that students could still pass, even if they bombed the multiple-choice reading comprehension section. Burris, the Rockville Centre principal, pointed out that you could still pass if you got as few as 5 out of the 24 multiple-choice questions correct — that’s worse that random guessing.

Perhaps the reason for selecting an easier pass bar for English has to do with the types of students who took this  exam. Unlike the algebra exam, which the state required for every first-time algebra student, the new Common Core English Regents test for 11th graders was voluntary.  (Students could take one or the other, or both.) Burris, for example, opted to give only the old pre-Common Core exam to her students. She said her informal survey of other Long Island principals found many had done the same thing. Those who did give their students the new Common Core English exam often gave it only to their honors and advanced students, she said.

If Burris is right, that means scores could be even lower two years from now, when the full student population takes the new exam. And it will be just as steep a mountain to get New York’s high schoolers college ready in English as it will be in math.