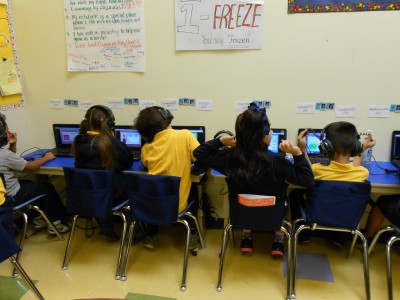 Many schools across the country are experimenting with blended learning, where students are taught by a combination of computers and human teachers, but it is such a new phenomenon that there is little empirical evidence to prove that students learn more this way.

One Princeton undergraduate looked at the test scores of 35 California schools that are using a so-called “rotation” model, where students rotate between computers and teacher-led instruction throughout the day. Laura Du’s empirical paper, “The Potential of K-12 Blended Learning: Preliminary Evidence From California Schools,” found that these schools produced significantly higher test score gains than traditional schools who serve a similar demographic. These gains were equivalent to the difference between two achievement levels, such as “below basic” vs. “basic” on California assessments. In her analysis, Du matched each blended-learning school with a similar traditional school and compared test scores. Du also discussed her research here on EdSurge.

The problem is that many of the blended-learning schools in the study are charter schools. They included schools run by Aspire, Rocketship Education, Summit, Alliance College-Ready Public Schools and KIPP. Du’s matching analysis doesn’t account for the likelihood that students who attend charter schools come from more motivated families and would be likely to learn more in any setting. It’s quite possible that Aspire’s blended learning model produces better results not because it’s using computers, but because it has better students entering its classrooms than the regular public school down the street.

To my mind, the failure to find meaningful differences in student performance between charter schools that do and don’t use computerized learning is significant. But it’s also fair to say that it’s premature to say whether blended learning works or not. Teachers are still experimenting with different ways to do it. Educational software companies are at the early stages of producing computerized instruction. Even if some version of computerized instruction does produce great results, it may take many years to figure it out.

The Hechinger Report’s coverage on digital education is here.

Can technology improve preschool? Louisiana teachers are about to find out

Instead of getting ready for the tech revolution, schools are scaling back