Is U.S. high school a wasteland? Or are teenagers getting a better education today than they were 40 years ago? That’s a puzzle offered in a release of national test scores on June 27, 2013 by the National Center of Education Statistics.

According to the National Assessment of Educational Progress (NAEP), test scores for 17 year olds have not improved since the early 1970s. That is, the average 17 year old in 2012 got about the same score in reading and math (287 and 306, respectively) as a 17 year old in 1971 or 1973 did (285 and 304, respectively). Scores have bobbled up and down a point or two over the years, but, statistically speaking, they’ve been indistinguishable from each other. (These scaled score numbers are arbitrary, but think of them like SAT scores. A difference between, say, a 580 and a 590 on a math SAT isn’t huge. And the difference between 285 and a 290 on this NAEP test is also tiny).

While 17 year olds have flatlined, both nine and 13 year olds have shown statistically meaningful progress during this same 40-year time period. So, you can’t explain it by the changing racial/ethnic demographics in our country. (Back in 1971, 80 percent of U.S. students were white, compared with 56 percent in 2012. The Hispanic population soared from 6 percent to 21 percent).

So the question is, what’s going on — or not going on — in high school?

“We’re all concerned with these high school students,” said Dr. Peggy Carr, the associate commissioner of NCES. “The pattern is clear…younger students are showing stronger gains.”

One answer offered by Carr is that high school drop out rates have plummeted and that means that we’re not comparing the same group of students. Dr. Carr particularly pointed to the Hispanic drop out rate, which more than halved from 32 percent in 1990 to 15 percent in 2010. That means that the weakest teenagers who weren’t even part of the testing pool in 1971 because they’d dropped out of school are now staying in school. Their low test scores might be bringing down an average that would otherwise have been higher.

Carr argues that flat scores aren’t terrible. “It’s a good thing that they’re not going down,” she said.

You can test that hypothesis by looking at NAEP’s breakdown of scores by percentiles. If the dropout theory holds water, then students who score in the middle and top should have been showing improvements over the past 40 years just like the nine and 13 year olds.

Instead, we see stagnation at the middle and the top. All the gains are among the bottom students. (Click on the chart below to see a larger version.) 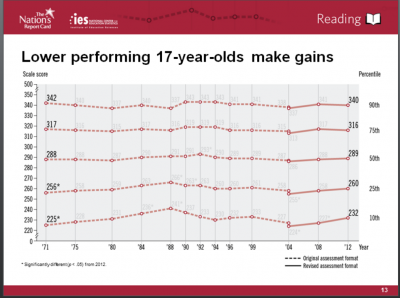 There’s a similar story in math. The bottom students are showing the biggest gains, and here, the middle students show a bit of improvement. But no improvement among the top kids. 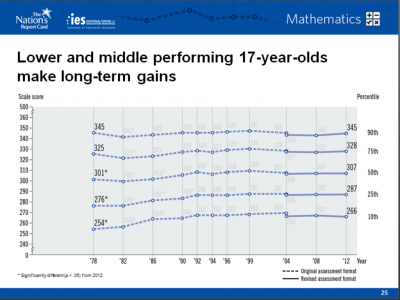 So, we seem to be doing a decent job of starting to close the achievement gap, but perhaps at a cost of not propelling our best students. Perhaps high school is a wasteland for them? We’re not just talking public schools. This long-term NAEP test is a statistically representative sample of students in the entire nation, including the wealthiest children who attend private schools.

Back in May 2013 I attended a seminar by Martin Carnoy of Stanford University, who was analyzing different international data. But his conclusion was the same. “The problem is at the top,” he said. “U.S. top students are way behind top students in other countries.”