Debunking one myth about U.S. teachers 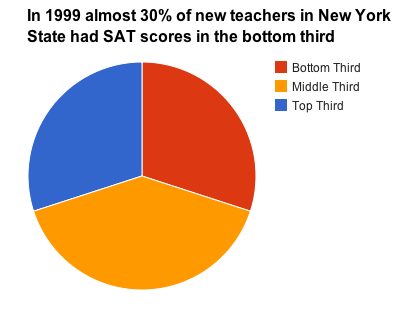 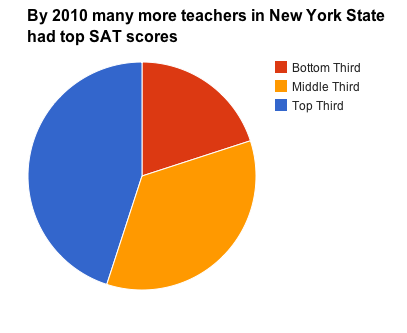 Back in 2010, McKinsey & Company issued a report that made a powerful argument: the world’s top performing school systems draw teachers from the best and brightest in their societies, but in the United States, almost half of new teachers come from the bottom third, as measured by SAT scores.  It’s been cited by a New York Times columnist and by officials at the Organization for Economic Cooperation and Development to suggest what the United States might do differently to improve its education system.

But several new research papers suggest that U.S. teacher quality never declined as badly as that report said, and by 2010 had already turned around markedly for the better. For example, a detailed study of new teachers in New York state, published in December 2014 in Educational Researcher, found that at the worst point — in 1999 — almost 30 percent of new teachers came from the bottom third, as measured by SAT scores. Another thirty percent came from the top third. Ten years later, in 2010, the number of new teachers coming from the top third had risen dramatically, to more than 40 percent. And fewer than 20 percent of new teachers scored in the bottom third.

The New York State data is echoed nationally. A 2013 study by Dan Goldhaber and Joe Walch at the University of Washington found rising test scores for new teachers. Another, as-yet-unpublished Stanford study confirms that the SAT and ACT scores of a typical new teacher had declined to the 42nd percentile in 2000 — a middling figure, not a bottom one. By 2008, those average scores had risen 6 percentage points, to the 48th percentile.

“The idea that teachers have consistently come from the lower third is just wrong,” said Susanna Loeb of Stanford University, a co-author of both the New York state paper and the forthcoming national study, in an email exchange.

Kate Walsh, president of the National Council on Teacher Quality (NCTQ), has been a critic of the quality of rookie teachers.  She called the rising academic caliber of new teachers in New York state “good news.”

“But my problem is that there are still large numbers of teacher candidates who don’t meet that standard,” Walsh said. “This is a trend. This isn’t mission accomplished.“

To be sure, 48th percentile still means that 52 percent — more than half — of all SAT and ACT test takers scored higher than the average new teacher.

It has long been known that the academic abilities of new teachers declined from the 1960s through the 1990s. In large part, that’s because many bright women, who had traditionally gone into teaching, suddenly had many other professional opportunities open to them, from law and medicine to business. But it was unclear precisely how far the academic ability of the teaching profession fell. Newer data from the National Center for Education Statistics now tracks individual students as they graduate from college and enter various sectors of the workforce (known as the Baccalaureate and Beyond surveys). And that is why education researchers can now more accurately calculate the SAT and ACT scores of people who enter the teaching profession.

Of course, SAT and ACT scores are an imperfect measure of academic ability. And some experts argue that teachers who were once struggling students themselves can make the best teachers. Still, rising test scores are a sign that the teaching profession is becoming more desirable to young adults.

In the unpublished national paper, a chart shows that new teachers in 2008 came pretty evenly from throughout the SAT distribution. Back in 1993 and again in 2000, new teachers were more likely to have had a SAT score in the lower percentiles. In other words, 20 years ago there were very few top SAT scorers entering teaching. Now there are many more. The authors found that schools in big cities with high minority populations were particularly successful at recruiting teachers with higher SAT scores.

When you dig deeper in to the national numbers, it shows that math SAT and ACT scores are driving the improvement. Math scores for teachers reached a low in 2000 and then rose strongly. Verbal test scores increased only modestly.

There could be a variety of explanations for why stronger students are going into teaching. One hypothesis is that schools could be pickier in their hiring during an economic recession, with fewer spots to fill and more candidates. But it’s also possible that policy changes that stiffened teacher credentialing, including new requirements in the 2001 No Child Left Behind education act, raised the standards for incoming teachers. Teach for America, which recruits high-ability students to teach, contributed to the SAT score increase, too, but those recruits weren’t numerous enough to account for most of the rise.  NCTQ’s Walsh credits the efforts of former New York City Education Commissioner Joel Klein to recruit high-caliber college graduates to teach in low-income schools, and said she believes that the city then became a role model for the rest of the state.

The improved caliber of new teachers hasn’t yet translated into improved performance, in the form of higher international test scores. At least among 15-year-olds tested on the Program for International Student Assessment (PISA), the U.S. didn’t improve in the most recent 2012 tests. Maybe we (or McKinsey) will have to come up with another reason that the U.S. school system isn’t ranking at the top internationally.