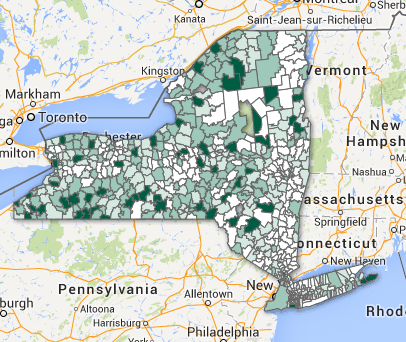 A new graphic shows how uneven public pre-K is throughout the state of New York. The school districts shaded in dark green are where more than 75% of the 4 year olds attend a universal pre-K program funded by the state. In the Clifton-Fine school district, only 25% of the children are poor, but 100% of their 4 year olds are served in the public schools. The state spends $4123 on each of them. Montauk is another interesting example. Only 12% of its student population qualifies as poor, but all of its 4 year olds are in public pre-K, costing the state $912 each. But in New York City, where 34% of the children are in poverty, only 59% of the kids are in public pre-K. The state spends $3895 on each of them. More than 230 school districts have opted not to participate in public pre-K.

Two reports were issued Oct 24, 2013 on the cost of extending public pre-K to all students.

The Challenge of Making Universal Prekindergarten a Reality in New York State by the Citizen’s Budget Commission.