Three lessons from the science of how to teach writing 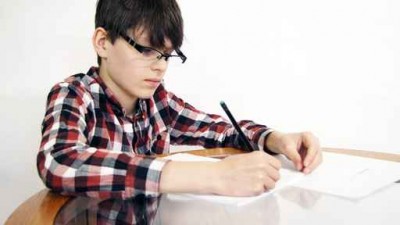 What’s the best way to teach writing? The experts have many answers — and they often contradict each other.

In contrast to the thousands of studies on effective methods for teaching reading and mathematics, there are relatively few rigorous studies on writing instruction. That’s partly because it’s time-consuming and expensive to assess writing quality in a way that can be quantitatively measured. Commonly, researchers come up with an eight-point scale. They write descriptions and sample essays to show what each score involves. Then they train teams of graders to score properly and consistently. But writing quality is ultimately a subjective judgment. What you consider to be well-written, I might not.

Steve Graham, a professor of education at Arizona State University, has made a career out of monitoring research studies on teaching writing, to figure out which methods actually work.  For a forthcoming article*, Graham and two colleagues, Karen Harris  of ASU and Tanya Santangelo of Arcadia University, looked at approximately 250 of the most prominent studies on how to teach writing to students from kindergarten through 12th grade.

Graham’s review of the research doesn’t resolve the age-old debate of whether students learn writing best naturally —  just by doing it — or through explicit writing instruction.

But there are effective practices where the research is unequivocal. Distressingly, many teachers aren’t using them. “We have confirmation of things we know that work, but are not applied in the classroom,” said Graham.

To teach kids to write well, you need to ask them to write a lot. You’re not going to become a great basketball player unless you play a lot of basketball. The evidence is strong that this is true for writing too. Five studies of exceptional literacy teachers found that great teachers ask their students to write frequently. In nine separate experiments with students, 15 additional minutes of writing time a day in grades two through eight produced better writing. Seventy-eight percent of studies testing the impact of extra writing found that student’s writing quality improved.

Several studies found unexpected bonuses from extra writing time. Not only did writing quality improve, so did reading comprehension. Another cluster of studies proved that writing improves a students’ mastery of the subject; the act of writing helps you learn. (Another reason for teachers to refrain from spoon-feeding printed notes to students.)

However, surveys of U.S. teachers reveal that after third grade, very little time is spent writing in classrooms. In fourth through sixth grade, on average, 20-25 minutes a day is spent on writing, according to Graham. Writing assignments rarely extend beyond a page; sometimes they’re not more than a paragraph. This is what teachers self-report, and if anything they’re probably overstating how much writing they’re asking of students.

In a 2011 survey of classroom writing instruction, “A Snapshot of Writing Instruction in Middle Schools and High Schools,” published in English Journal, Arthur Applebee and Judith Langer at SUNY Albany found that U.S. students were expected to write only a total of 1.6 pages of extended prose for English a week, and another 2.1 pages for all their other subjects combined. Applebee and Langer also observed classrooms across the four core subjects (English, science, math and social science/history) and found that, on average, only 7.7 percent of classroom time was devoted to writing a paragraph or more. Applebee and Langer called that “distressingly low.”

Why so little writing? Graham hypothesizes that many English language arts teachers are more passionate about literature than teaching writing. But in surveys teachers often say they don’t assign more writing because they don’t have the time to read and provide feedback on frequent long assignments. I can sympathize with a high school English teacher who has 37 kids in her class.

One could argue that fewer high quality writing assignments might be better than a bunch of low quality ones. But again, the teacher surveys and classroom observations reveal that students are more commonly asked to write summaries. “We don’t see a high level of writing activities that involve analysis and interpretation,” said Graham. “We’re not seeing development of skills you need for college and the workplace.”

Common Core may change things, as the standards ask for more writing and analysis, not just in English class but also in the social sciences, hard sciences and math.

It’s unclear what the ideal amount of time for writing is. Graham, who wrote a teachers’ guide of evidence-based techniques for teaching writing for the What Works Clearinghouse unit of the Department of Education, recommends one hour a day. He admits he doesn’t have research to substantiate that number. But he may be onto something: When Poland increased its language arts classes to more than four hours a week for each student, its scores on international tests began to soar.

2. Write on a computer

In 83 percent of 30 studies on the use of word processing software, students’ writing quality improved when they wrote their papers on a computer instead of writing by hand. The impact was largest for middle school students, but younger students benefited, too. The theory is that students feel more free to edit their sentences because it’s so easy to delete, add and move text on a computer. The more editing, the better the final essay.

I was concerned about how these experiments were constructed. Could graders have been more biased toward these word-processor essays because typed fonts are more legible than hand-written ones? In most cases, the hand-written essays were retyped first before the graders scored them. So graders had no idea which essays had been drafted by computer and which by hand, and still the word-processor essays were rated higher.

It’s also possible that the spell checkers and grammar checkers that are sometimes bundled with word processing software enable students to submit cleaner drafts, which are perceived to be of higher quality.

Some educators feel passionately about the importance of writing by hand, convinced that the act of writing neurologically imprints stronger memories. And there’s some early evidence that note taking might be more effective by hand. But if your goal is writing quality and not memorization, it seems the evidence points to word processing, especially  beginning in middle school.

Another benefit for educators who believe that students should write not just for teachers: computerized text files are easier to share with classmates, providing more opportunity for a real audience and feedback.

Despite this evidence,teacher observations and surveys reveal that teachers have been slow to adopt this basic technology.  In Arthur Applebee and Judith Langer’s observations, students used word processing software in only 5.1 percent of the classes. Separate 2008 and 2010 surveys by Graham show that “too many schools still use pencil and paper as the primary or only writing medium,” he wrote.

Three studies did show that teaching kids how to combine two simple sentences into a single complex sentence was beneficial. (As a writer, I find that baffling as I am always trying to shorten my sentences! That makes me question the judgment of the essay graders.)

But traditional grammar — diagramming sentences or teaching grammar rules — didn’t help. Graham suspects that’s because grammar lessons often feel disconnected from actual writing. Graham found one study that showed great improvement in student writing quality when teachers modeled correct usage, showing how to use grammar rules in sentences that students were drafting. But not many experimental studies are looking at effective procedures for teaching grammar.

In this case, classroom practice isn’t totally at odds with the research. Grammar instruction has declined in U.S. classrooms over the last 40 years. But that might be because there isn’t much writing instruction going on at all.

* “Research-Based Practices and the Common Core: Meta-Analysis and Meta Synthesis,” (in press for The Elementary School Journal)

With new standards, can schools find room for creative writing?